In June 2007, 2012 and 2014 Julian McGlashan and Cathrine Sadolin performed endoscopy studies and endoscopy/high speed studies in 2012 and 2014 at CVI in Copenhagen. Twenty-one singers (ten males and eleven females) in 2007, thirteen singers (seven male and six females) in 2012, and sixteen singers (seven males and nine females) in 2014, a total of 32 singers (fifteen male and seventeen females), trained in the Complete Vocal Technique were recruited and asked to produce a grunt. 17 subjects had pictures that we could analyse for this particular study, so the rest were excluded as they could either not tolerate the examination, did not perform the grunt correctly, or the image quality was not adequate for interpretation. Each singer was examined using an OTVS7 camera (Olympus) and ENFV2 videoscope (Keymed) coupled to the Laryngostrobe (Laryngograph) digital capture system. Laryngograph electrodes were positioned over the thyroid cartilages and an omnidirectional microphone placed at distance from the singer which allowed recordings at all levels of loudness. Also the ELG and acoustic signals were captured and analysed with the Speech Studio (Laryngograph) software program. The grunt video images were analysed by Julian McGlashan and Cathrine Sadolin and the appearance and relationship between the key anatomical features was agreed by consensus and documented. The consistent features were identified and descriptive and explanatory text to aid pattern recognition.   For the grunt these are the parameters we looked at: the shape of the glottis, the position of the false cords, the anterior posterior narrowing, the shape of the pirriforma fossa, the hight of the larynx, the pharyngeal wall, the epiglottis and the arytenoid/cuneiform complex. Not only did we look at what was changing when using the grunt, we also looked at what was actually vibrating.

To get a better understanding of the laryngeal changes associated with grunt and to examine the interaction of supraglottic vibration during intentional grunt and vocal fold vibration. 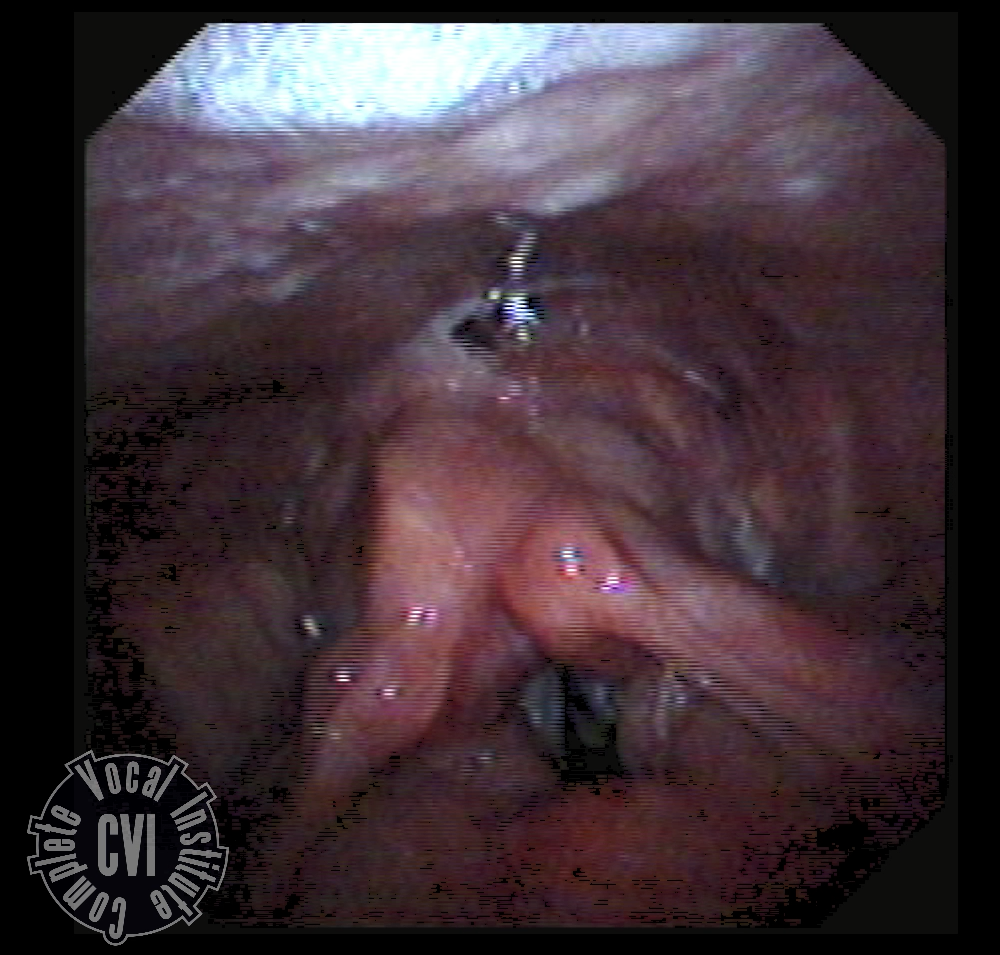 When we look at the video examples of the grunt the whole of the supraglottis appeared to vibrate in a random manner for some. In other cases it was predominantly the aryepiglottic folds that was vibrating randomely. There was also a large glottal gap with apparent laxity of the vocal folds and false folds.

Grunt can be done safely. But it need a good technique to ensure accurate setting done correctly and an intentional application of the effect.

This study with the title ‘Analysis of the mechanism of effects such as Distortion, Growl, Grunt and Rattle used in a healthy way by 18 professional singers’. was presented by Cathrine Sadolin at Pevoc 10 (Pan-European Voice Conference) Prague, Czeck Republic, August, 2013.