Laryngeal and waveform recognition of screams

Screams are no different from other notes. A scream is actually just a high-pitched note in a given mode. So if you can control the modes, you can make a scream. Screams are produced in a combination of levels from 1-6. The vocal cords produce a note and the vocal tract gives it a mode and a light sound colour (see ’Various levels of the vocal tract’).

15 subjects had pictures that we could analyse for these particular studies, so the rest were excluded as they could either not tolerate the examination, did not perform the rattle correctly, or the image quality was not adequate for interpretation.

Each set of modes video images were analysed by Julian McGlashan and Cathrine Sadolin and the appearance and relationship between the key anatomical features was agreed by consensus and documented. The consistent features were identified and descriptive and explanatory text to aid pattern recognition.

The Laryngeal gestures are more to be seen as patterns of progression from mode to mode, rather than aboslutes. The progession in the patterns can be used as guidelines on how to identify the modes within each singer.

For the modes these are the parameters we looked at: the shape of the glottis, the position of the false cords, the anterior posterior narrowing, the shape of the pirriforma fossa, the hight of the larynx, the pharyngeal wall, the epiglottis and the arytenoid/cuneiform complex.

Not only did we look at what was changing between using the mode, we also looked at what was actually vibrating.

To get a better understanding of the laryngeal changes associated with screams and to examine the interaction of supraglottic vibration during intentional screams and vocal fold vibration.

Results for screams in Neutral 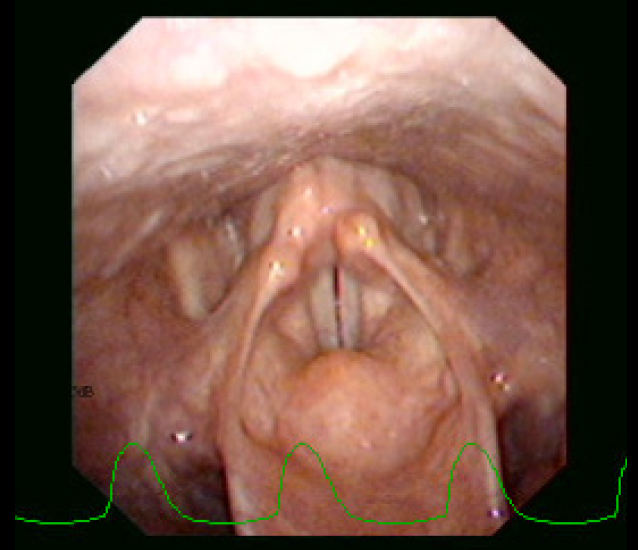 Also notice the Neutral without air laryngograph waveform shows a shallower upward (closing) and downward (opening) curve compared to the sinusoidal waveform with occasional spike seen in Neutral with air. This corespond nicely with the louder volume often used in screams in Neutral. When compared to the metallic modes,  the waveform is frequently bell shaped and symmetrical and the overall contact time is reduced which means that the gaps (when the vocal folds are apart) are shorter.

Results for screams in Curbing

In screams in Curbing the false folds approach each other slightly, covering some (the lateral aspect) of the vocal folds. The front and the back of the laryngeal opening approach each other, making the angle sharper between the aryepiglottic folds and the lower part of the epiglottis. The opening of the larynx is more narrowed, creating an angle between the arytenoids and the aryepiglottic fold. The cuneiforms are also rolled in a bit. 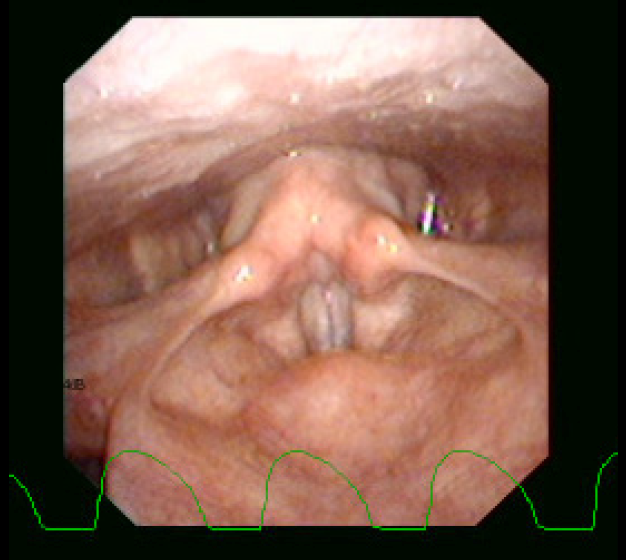 Results for screams in Edge

Notice in screams in Edge the opening of the larynx is even more narrowed, and the cuneiforms are rolled in even more than in Overdrive. This makes it hard to see the vocal folds. The narrowing creates an even sharper angle between the arytenoids and the aryepiglottic fold and also an even sharper angle between the aryepiglottic fold and epiglottis. The piriform fossae and area between the back wall (posterior pharyngeal wall) and the larynx becomes very small and is often closed off altogether. The larynx is raised even higher (you can see that it gets closer to the camera).

Also notice the Edge laryngograph waveform shows a steep onset and a quite long closure of the vocal folds with a gradual roll off.  The steep onset indicates that the vocal folds are coming together very rapidly and stay together for longer, so they are closed much longer than they are open.  This corresponds nicely with the loud volume used in screams in Edge. 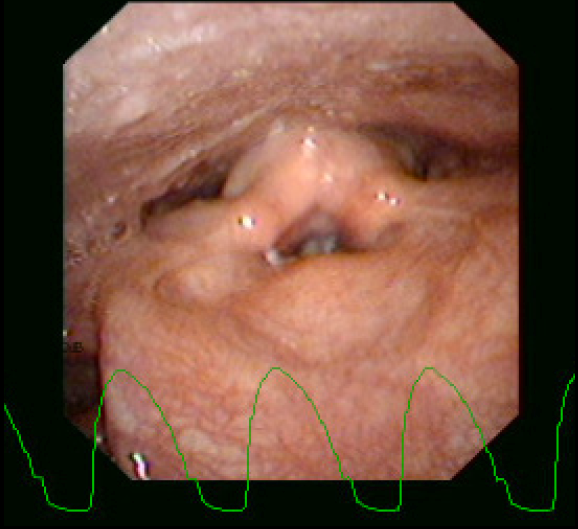 Screams can be done safely.

In all the examples where we can see the vocal folds, or look at the laryngograph trace, there seems to be a resonably regular pattern, and there didn’t appear to be any evidence of the effect (or any additional noises) being produced in the vocal fold level.

But it need a good technique to ensure accurate vocal mode setting done correctly and an intentional application of the effect.

This information comes from a study Visual Vocal Mode Test Study on stills, with the title  ‘Laryngeal gestures and Laryngograph data associated with the four vocal modes as described in the Complete Vocal Technique method of singing teaching’. This study was presented by Cathrine Sadolin and Julian McGlashan at BVA ‘Choice for voice’ conference in London, England, 2010.