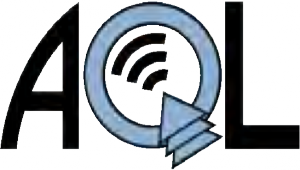 VOCAL EFFECTS IN SINGING: A STUDY OF INTENTIONAL DISTORTION USING LARYNGOSTROBOSCOPY AND ELECTROLARYNGOGRAPHY

Intentional Distortion (ID) is a sound commonly used in rock and other commercial genres of music which adds a grating noise to a sung note for vocal effect [1]. In contrast unintentional distortion is an uncontrolled, unintentional noise which is a result of faulty technique. A good commercial example of this effect can be heard on the word ‘down’ from the line “Don’t dream of women ’cause they only bring you down” sung by Dio [2]. There is debate as to whether this voice quality is damaging to the voice and vocal folds but the reality is that this vocal effect is widely used by some singers without causing apparent harm [1].

Previous studies have demonstrated that ID is produced by vibration of the false folds [3,4,5,6]. Borch [6] with digital high-speed imaging and McGlashan et al [3,4] showed with synchronized electro-laryngography (ELG) and stroboscopy and that during periods of ID vocal fold vibration appears to continue relatively unimpeded.

Sadolin has developed a pedagogic method named the Complete Vocal Technique for teaching singing [1]. The concept, determined from experiential development, is that there are four main modes of singing (Neutral, Curbing, Overdrive and Edge) which vary in the degree of ‘metal’ added to the sound. Each mode is associated with ‘rules and limitations’ in production which aid the singer in producing sounds of different pitch, loudness and vocal quality. Each can also be modulated in terms of sound quality (dark and light). Once the mode and sound color can be controlled vocal effects, including ID, can be added. The main objectives of this study were (1) to further elucidate the mechanism of production of ID during singing and (2) to examine the affect of ID on vocal fold vibration on a sustained vowel in each of the four modes by assessing changes in ELG and acoustic parameters.

In study (1) each singer was examined using an OTVS7 camera (Olympus) and ENFV2 videoscope (Keymed) coupled to the Laryngostrobe (Laryngograph) digital capture system. Laryngograph electrodes were positioned over the thyroid cartilages and an omnidirectional microphone placed at distance from the singer which allowed recordings at all levels of loudness. In study (2) the ELG and acoustic signals were captured and analysed with the Speech Studio (Laryngograph) software program.

Each singer was asked to sing a sustained note at a comfortable pitch, sound color and mode alternating at least twice between the mode and mode with ID. Two assessors (JM & CS) rated the laryngopharyngeal changes by consensus.

Each singer was asked to sing a sustained note at a comfortable pitch, sound color and mode alternating at least twice between the mode and mode with ID across all four modes. The mean fundamental frequency (Fx) and standard deviation of Fx (SD Fx), mean (Qx) and standard deviation of the Contact Quotient (SD Qx), Jitter Factor, Shimmer +, Normalized Noise Energy (NNE) and Sound Pressure Level (SPL dB) were extracted from an average of 470ms of sustained vowel using the multidimensional voice profile (MDVP) analysis in the Speech Studio (Laryngograph) program.

Sixteen (8 male, 8 female) video recordings were of adequate quality for analysis. The key changes in the laryngopharyngeal appearances with ID are summarized in Table 1 and are demonstrated for each mode in Fig. 1(a-b, c-d).

Table 1. Number of features present in the n=16 singers

Figure 1. Images on left (i) are the mode without ID and on the right (ii) with ID for a male singer: 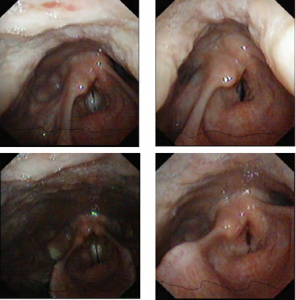 Twenty singers were able to produce adequate pairs of sound samples for analysis in almost every mode with and without ID. The results of 3-way ANOVA with the factors sex, mode, and distortion for each of the MDVP parameters are shown in Table 2. 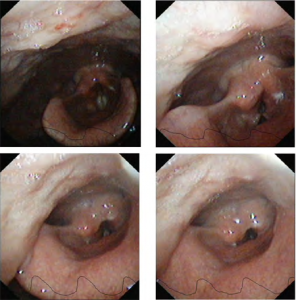